As we enter week 6 of the college football season, we can finally see some separation from the contending teams and the pretending teams. LSU, Bama, Wisconsin, and Oklahoma in the infamous words of Dennis Green’s Monday night football rant “Are who we thought they were” as all have been at the top of the polls since before the season started and they all have proved they belonged. On the other hand Texas A&M, Virginia Tech and Florida State have all tumbled out the top 10 and are just holding on for dear life to salvage their seasons. There have been a few upstarts as well as Clemson, Texas, and maybe the biggest surprise of them all in my book the Auburn Tigers have silently crept up the polls and put themselves in prime position to contend this year. The meat and potatoes of most programs schedules are now on deck and the battle for a spot in the BCS national championship really takes hold. This week’s feature games include the Red River Shootout between Texas and Oklahoma of course, which may be much more interesting this year than most of us anticipated. Florida vs. LSU would have been good match up this time last week until Bama made a pretzel out of Jeff Brantley’s ankle. Lord be with you Jeff Driskell, the freshman starting in place of Brantley against that mean LSU defense. Ohio State vs. Nebraska sounds like it should be to-notch game especially with the weight those two names usually carry, but that’s until you look at those two teams season so far. Ohio State has been dismal on offense and the Huskers just got husked by Wisconsin.


Our local products in Tennessee have fared well so far this year. The University of Tennessee is 3– 1 on the strength of Tyler Bray’s arm and the teams prolific aerial attack. Even the Vanderbilt Commodores are 3-1 although they are coming off a blowout loss to South Carolina. There is plenty to be excited about for both programs as both show potential to be in the mix of the SEC East this year and beyond. I know a lot of people reading this will say ok I will give you Tennessee but Vandy? Yes the Commodores traditionally stink but young James Franklin is bringing a certain level of swagger to that program and has picked up the recruiting as well. Don’t be surprised when Vanderbilt pulls out a few upset victories over the next couple of years. Red River Shootout: Texas (4-0) vs. Oklahoma (4-0) – Going into the season it was hard for me to imagine this game would be any good. Oklahoma was far and away the best team in the Big 12 and ranked # 1 in the pre-season polls. Texas was just trying to get their respect back after a disappointing 5-7 campaign last year that saw them miss a bowl game altogether. But with the emergence of the little bro duo as I like to call them, Case McCoy and Jaxon Shipley have brought the Longhorns back from the dead (And David Ash as well). Oklahoma has been rolling of course with that explosive offense and experienced defense. You can’t start off a conversation about Oklahoma’s offense without mentioning QB Landry Jones and his top WR Ryan Broyles. Those two guys are in sync more than Justin Timberlake and JC Chavez. They provide a tough match up for the young Longhorn secondary. Another bright spot for Texas is freshman RB Malcolm Brown who has provided the rushing attack the Longhorns missed so much over past few years. This one should be close just for the sheer hatred that both of these schools have for each other. But when push comes to shove and Jones begins to heat up for OU, I just don’t see how the young Texans will be able to stop the Boomer Sooners offense. The Pick: Oklahoma 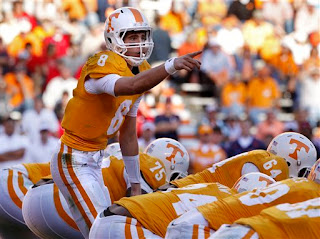 Georgia (2-2) vs. Tennessee (3-1) - This is an elimination game of sorts. Both teams already have one lost in the SEC with Georgia going down to South Carolina and Florida drilling UT a couple of weeks ago. The winner of this game will at least be tied for first place in the SEC East after South Carolina lost to Auburn last week. The game itself should see excellent QB play as pre-season 1st team all SEC QB Andy Murray of Georgia will be going up against the Tennessee gunslinger himself Tyler Bray (Who surprisingly didn’t make the cut of All-SEC picks in the pre-season when guys like Stephen Garcia did, what a joke).Georgia’s young freshman RB Isaiah Crowell has picked it up of late rushing for 100 yards in both of the last two SEC games for the Bulldogs. The team that is able to stop the other’s offense should win this game. That easier said than done as both have potent attacks as I mentioned above. WR Da’Rick Rogers, who now is Bray’s new favorite target with the ACL tear to the dynamic Justin Hunter, will have to step up big time in this one. Tennessee will need to get him the ball early and also try to establish its run game. The Bulldogs have one of the better defenses in the SEC so that will be hard to do. If Andy Murray can control himself and RB Crowell gets going, I think it will be too much for the Vols even though the are playing in Knoxville. The Pick: Georgia 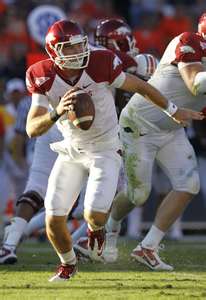 Auburn (4-1) vs. Arkansas (4-1): Another good SEC game on the docket and I just couldn’t help )myself from previewing this one. This one intrigues me because you have two teams with spread offenses capable of putting a lot of points of the board in a hurry. Arkansas proved that last week as they came back from 18 down to beat Texas A&M. Tyler Wilson was a MAN as he passed for 510 yards despite taking multiple hits from the Aggies. Auburn defeated South Carolina and now has the ol ball coach Steve Spurrier switching out his QBs after Stephen Garcia (9/23 with two picks) could only muster up 13 points for the Gamecocks. Auburn’s defense surprisingly held stud RB Marcus Lattimore to just 68 yards as well but they won’t have to worry about that much against the Razorbacks who’s running game has been absent every since RB Knile Davis went down. Michael Dyer will lead the Tigers on offense as they try to control the clock. Arkansas and Bobby Petrino likes to get up and down the field and especially with those receivers they have. Jarius Wright is just a beast and creates match up nightmares all over the field with his blend of size and speed. That not even mentioning Joe Adams, Greg Childs and Cobi Hamilton. Wilson just has too many targets and I think last weeks performance from the Auburn defense was more of the product of poor play from Stephen Garcia. Wilson will have no such let down so I will roll with the Razorbacks on this one. The Pick: Arkansas 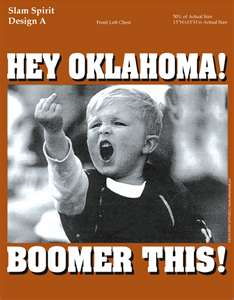 Game of the Week: Texas vs. Oklahoma: Anytime the Red River Shootout is on the schedule its makes for an easy pick. This game will be closer than most expect as I stated earlier. Who knows maybe Texas can even spring the upset but even if they don’t it makes for an interesting game seeing Longhorn and Sooner fans interact. You can see the disdain for each other as they are entering the stadium and when the drinks get flowing the crowd will be rocking.

Most Intriguing Game: Nebraska vs. Ohio State: This sounds like it should a candidate for game of week or even of the year in most seasons. Unfortunately this isn’t your granddads Buckeye teams as they have just been horrific on offense this year. To add to there misery, they got word from the NCAA that RB Dan Herren and WR Devier Posey would has additional game added to there suspensions. Nebraska can’t be that happy either after getting it handed to them last week by Wisconsin. I think its intriguing because it’s the second game in the Big 10 for the Huskers after their baptism by fire last week. They should come out much more relaxed and run away in this one but Ohio State still has playmakers on defense so we will see what happens here. 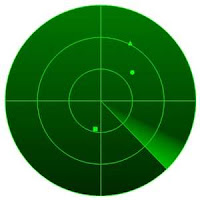 Under the radar game: Arizona State (4-1) vs. Utah (2-2). Lets take a trip out west for a showdown in the Pac-12. If the Sun Devils can get by Utah then the schedule opens up nicely for them to make a run at the Pac-12 title. If they lose this will, it would make things much harder than it has to be. 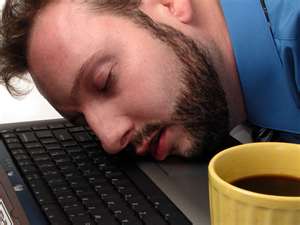 Wake me when it over game: Lousiana Tech (1-4) vs. Idaho (1-4) – Both have lost three in a row and rank in the bottom tier of offense and defense. So no good offense to watch against bad defenses, sounds like a classic snoozer to me. Coach better get it right game; Boston College (1-4) vs. Clemson (5-0) – Tom O’Brien is a good coach who has fallen on hard times with BC. He has a chance to show that his team is still somewhat relevant against the Tigers. He has to be on the hot seat after a miserable season last year and an even worse one this year. Good luck to him but I don’t see how he lasts past this year as their head coach but it he was to start a run to keep his job this would be the perfect game to start.

I also will be covering the Tennessee State vs. Southeast Missouri State game this weekend, so if your going to game make sure to holler at me.
Posted by SportAholic at 8:16 AM

Promote Your Page Too